The reason for the season

Thankfully, the Reason for the season still finds a place in the glittering sparklefest that is the shopping centre. Somewhat apprehensively looking for the annual scene of the Holy Family amongst Disney’s fairytale Christmas land, lest it had found no room at the consumer inn, we joyfully found the Child (who had apparently come early) lying in a manger, incongruous as ever. We spent a moment in contemplation of the profound Mystery whilst the hustle and bustle continued around, relieved that reference to the most beautiful Christmas gift had not been completely eradicated, if marginalised, from our retail heaven.

One odd feature was a message that accompanied the crib, ‘informing’ us that “according to the Bible, Jesus was born of Mary and Joseph”.  I queried, “Where does it say in the Bible…?” encountering the riposte, “Where does it say in the Bible that it has to say it in the Bible?” Even so, attributing the fatherhood of Christ to Joseph by referencing the Good Book is something of a misquote. As is actually related, poor good Joseph had a dilemma to face: finding his bride-to-be with child by Another, till the angelic dream assured him “the child within her was conceived by the Holy Spirit” and to take his role as her protector and stepfather of the child. Born in controversy, poverty, humility, and danger; under the light of a strange star that drew seekers from afar, echoed by our illuminations, this Son was and is the brightest Christmas light. 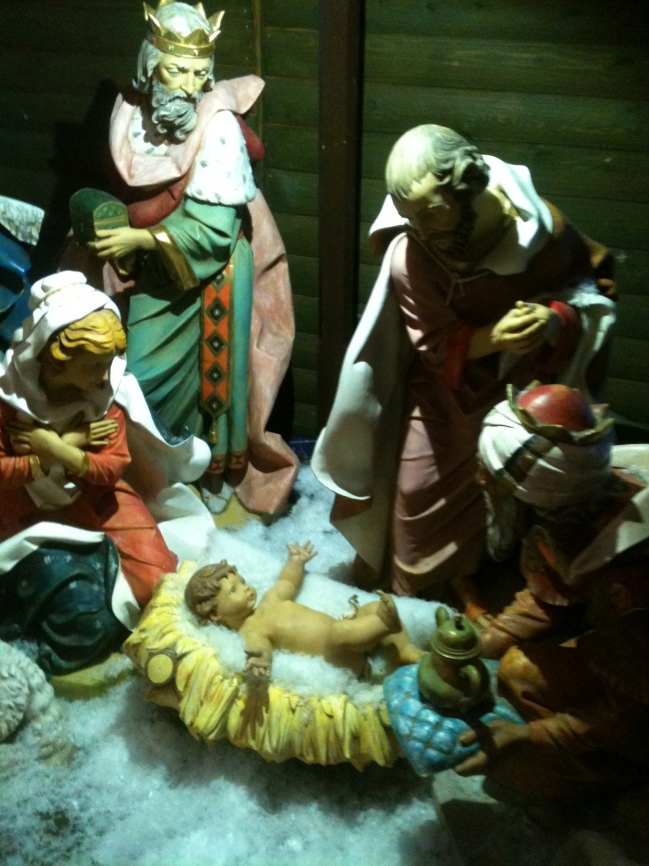 Like Loading...
This entry was posted in Uncategorized and tagged Advent, Christian, Christmas, God, Holy Family, Jesus. Bookmark the permalink.